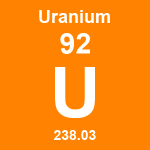 NATURE AND SOURCE
Uranium occurs in nature as an oxide and is mined as U3O8, which contains about 0.7 wt% of the fissionable isotope 235U. The impure U3O8 is converted to UO3. UO3 is then hydrofluorinated to form UF6, a gas, at slightly elevated temperature and reduced pressure. UF6 is processed through a gaseous diffusion plant or gas centrifuge plant to separate the isotopes in the form of 235UF6 and 238UF6. The US Department of Energy enriches natural uranium from 0.7 wt% 235U to 3 -5 wt% 235U for commercial reactor fuel. For each kilogram of uranium that is enriched to 3 wt% 235U, five to six kilograms of DU (depleted Uranium) containing about 0.2 wt% 235U are produced. Historically, the enrichment process has produced more DU than is being used. Consequently, the Department of Energy has produced a large stockpile of material, estimated at 300,000 to 500,000 metric tons, in the form of uranium hexafluoride (UF6). This waste by-product of the enrichment process becomes the basic raw material in the production of DU metal.

Uranium hexafluoride (UF6) is chemically reduced with hydrogen to produce uranium tetrafluoride (UF4), commonly referred to as “green salt.” Green salt is reduced to metal by an exothermic reaction with magnesium. The product of the reaction is a high-purity, uranium metal mass, referred to as a “derby.”

Uranium products may be coated or clad to protect the surfaces and reduce exposure to personnel involved with subsequent handling in the field or to comply with regulatory requirements. Various coating materials such as acrylic paint, zinc, and nickel may be applied.

Depleted uranium is used in applications where its combination of high density, fabricability, relatively good mechanical properties, and availability give it an advantage over other materials. There are several commercial and military non-nuclear uses of depleted uranium:

Calorimeters/Detectors:  DU sheet is in wide-scale use as an absorber material in high-energy physics research at large accelerator laboratories. The high atomic number and density of DU presents a large number of atoms per unit volume to interact with the particles emerging from collisions in these detectors. Also,the slight background radiation from DU enables insitu calibration of the electronic read-out devices within such detectors, thereby improving the accuracy of measurement.

Radiation Shielding:  Containers made of DU are used to transport highly radioactive, spent fuel elements and radioactive isotopes for medical and industrial applications. In addition, DU is used as shields in medical equipment for radiation therapy.

Counterweights: Counterweights made of DU are used in aerodynamic control devices of airplanes, missiles, and helicopters.

Miscellaneous: Flywheels have been made of DU for large, inertial, energy-storage devices and as sinker bars for oil well logging.

Kinetic Energy Penetrators: Kinetic energy penetrators are made of DU because of its high density, fabricability, pyrophoricity, availability, and low cost compared to other heavy metals.

Shape Charge Liners and Explosively Formed Penetrators Lenses: Depleted uranium SCLs and EFP lenses are under investigation as a material for warhead applications in missiles, ammunition, and submunitions.

Armor: The U.S. Army has revealed that depleted Uranium is used as armor protection in the Abrams main battle tank.

Ownership, production, and use of DU are subject to state and federal regulations. Title 10, Part 40, of the Code of Federal Regulations describes the requirements for obtaining a Radioactive Materials License.

In general, possession of more that 15 lbs. of Uranium requires a license from the U.S. NRC or authorized Agreement State. However, users are exempt from this requirement for the following applications:

In addition, other local, state, and federal regulations may apply and should be checked prior to possession or use of Uranium.

There are three properties of the metal which require special precautions during fabrication and use:

Radiation: Depleted Uranium is a low specific activity (LSA) material. The radiation from DU is primarily non-penetrating; that is, it is very easy to shield so that it has little or no effect on people who handle it. In fact, DU is used as shielding for radioactive material.

Depleted uranium emits three types of radiation – alpha, beta, and gamma. While alpha radiation is insignificant as an external radiation hazard (skin stops alpha particles), it becomes a problem if inhaled or ingested. Once in the body, alpha rays, because of their short range and high ionization, are potentially more hazardous than beta or gamma radiation.

The permissible limits for radiation exposure are designated in Title 10, Part 20, Code of Federal Regulations. The limits are equivalent to an average of 100 mrem of exposure to whole body radiation per week and 625 mrem to the hands or feet. Operating experience using film badges and ring dosimeters indicate that persons working with DU receive very low levels of exposure to radiation compared to the permissible limits.

The greatest problem working with DU comes from finely divided airborne particles that can result from some manufacturing operations such as machining and grinding. It is essential to provide machine ventilation, area ventilation, and special filtering equipment to protect workers from radioactive dust and particles that could be inhaled or ingested into the body where radiation may affect body organs. Machines are enclosed and ventilated, and air monitoring and frequent urinalysis are conducted to ensure controls are effective.

Toxicity: Depleted uranium, like lead, is a heavy-metal poison that can be lethal if a sufficient amount of dust or fumes are ingested. The fact that DU is radioactive is helpful in this regard because it is much easier to detect its presence and protect against ingestion than it is for other non-radioactive, heavy metals like lead, tungsten, or tantalum.

Pyrophoricity: A pyrophoric metal is one that oxidizes rapidly, that is, can “burn” in air. DU becomes pyrophoric only when finely divided. Because pyrophoric reactions take place at the surface of the metal, surface condition and the amount of exposed surface area are critical. Solid metal oxidizes slowly. A smoothly-machined surface slowly turns to a tea color, and within a few days turns black.

Fires are extinguished by cooling the Uranium and by restricting access of oxygen to the uranium by covering it with graphite powder or with a dry-powdered chemical extinguisher. Water should never be used on Uranium fires. Water reacts with the hot metal and generates hydrogen, which exacerbates combustion.

As a manufacturer of Uranyl Actate, IBI Labs is often asked about solubility. Following is some guidance in the matter:

Uranyl Acetate is not very soluble in water. At best it is soluble at a rate of 8 grams per 100 ml of water. The material may take overnight to dissolve, so don’t hurry with it. Also, if the water is acidulated with some glacial acetic acid, it will dissolve more rapidly. There are some comments regarding the dissolve rate of deionized water over distilled, however we cannot comment on that at this time.

Uranyl Acetate is a very popular and widely used negative and nuclear stain. Users are cautioned to not use aluminum foil for the sealing of Uranyl Acetate solutions.  The use of Uranyl Acetate does require ultra-high purity and care with your work. IBI Labs manufactures ACS-grade Uranyl Acetate that must also pass solubility tests prior to packaging for our worldwide distributors.

IBI Labs offers a reliable and steady supply of other hard-to-find electron-dense compounds, including  Uranyl Formate, Uranyl Nitrate, and others. Please feel free to contact IBI labs for any Uranium-based compounds.

Our materials are made only from depleted Uranium.

Keep Away From Light:

Our recommendation is to keep Uranyl Acetate away from light for both staining as well as storage of the aqueous and solvent-based solutions as well as the dry crystals. Even some fluorescent lights may cause some precipitation and other negative effects in the materials.

Room Temperature. Uranyl Acetate has shown some evidence of being sensitive to light, especially the UV type emitted from common fluorescent lighting fixtures and sunlight, so best storage is in the dark.

Melting Point: 110°C
Introduction: All Uranyl compounds are becoming more and more difficult to produce, in part because of the increased surveillance of shipments of all materials containing radioactivity, no matter how low the level. All Uranyl compounds from IBI Labs, including Uranyl Formate, are manufactured from “depleted” uranium metal.

For some samples, the use of Uranyl Formate as a negative stain, vs. alternatives, such as Uranyl Nitrate or Uranyl Acetate, just gives superior results. For example, we can cite one publication: Negative staining of rat tail tendon collagen fibrils with uranyl formate, D. P. Knight, Tissue Cell. 1975;7(4):651-4.

When one is doing negative staining, often there is an interest in trying more than one type of Uranyl stain, since the different Uranyl compounds seem to give different results for different samples.

Characteristics of the product:  This is a very fine ground powder, yellow in color.

Uranyl Nitrate is usually used as an electron -dense stain for transmission electron microscopy. However, it has also found application as 0.01% aqueous solution as a as a local catalyst in the polymerization of methacrylates.

Uranyl nitrate is easily soluble in water, ethanol, acetone, and ether, but not in benzene, toluene, and chloroform. The aqueous solution can hold up to 56% of anhydrous salt at 25° C. Uranyl Nitrate solutions are more stable than those of Uranyl Acetate solutions, but are less efficient as a stain than the acetate. In tissue, it stabilizes nucleic acids and membranes when used prior to embedding. It is frequently used after sections are cut to “post stain” or further increase the contrast of membranes, etc., in sections. Uranyl salts, particularly acetate, are also used as negative stains for viruses and small cellular organelles in suspension.

IBI Labs offers a reliable supply of other hard-to-find, electron-dense compounds.  Please feel free to contact us  for any Uranium-based compounds.